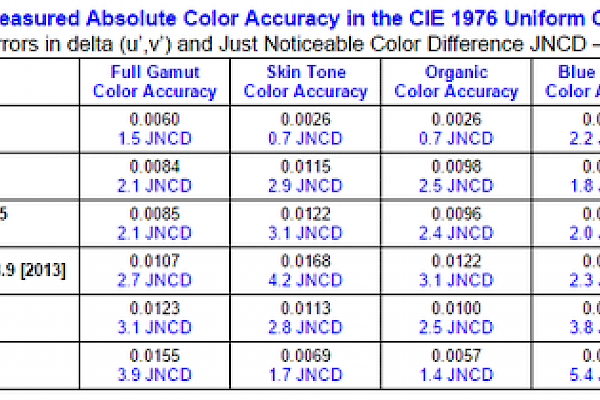 If you’re looking for a superior smartphone or tablet, you couldn’t go wrong looking at the Apple iPhone 6 Plus, a Samsung Galaxy Note 4, or a Microsoft Surface Pro 3. But if you want the mobile device with the most accurate colors, there’s only one to buy.

Displaymate display analyst Ray Soneira reported Tuesday that the Samsung Galaxy Note 4 represented the best flagship phone or tablet in terms of the overall or “full gamut” display color accuracy. In fact, it wasn’t even that close, with the Note 4 (using the Basic screen mode) coming out head and shoulders over the the 2013 Kindle Fire HDX 8.9-inch tablet, the iPad Air 2, the  iPhone 6 Plus, the Galaxy Tab S 10.5, and the Surface Pro 3.

Soneira also broke down the displays by various sub-categories: looking at the range of skin tones, for example, as well as the “organic” reds and oranges used by fruits like apples and carrots. Of less importance were the display’s blue accuracy, since the eye is less troubled by discrepancies in that range. Finally, there’s the white point, which affects all the lower-saturation range colors.

In the end, however, it didn’t matter: the Note 4 beat the others handily across the board, in every category. And as the table shows, the Microsoft Surface Pro 3 came in second, about tied with the Galaxy Tab S.  And in last place? Both of Apple’s devices.

Soneira did note, however, that both of Apple’s devices actually finished second in how they rendered skin tone and color accuracy, falling in to last place in terms of the gap in both how the iPad Air 2 and iPhone 6 Plus rendered blues and whites.

Of course, color accuracy is just one metric to evaluate smartphones and tablets. We’ve linked to our reviews of each product above to provide additional context. Which do you prefer?

For professional and affordable Website Design and Development, feel free to contact us at Farend, for no obligation consultation.

The above article has been originally published by PC World and can be seen here.